Racing/Running season is here!
Not to be confused with the rest of the year, when running season is always on.  All of the races I’ve been looking forward to all summer are finally here!


The first of many was the Showdown Half Marathon.  I ran this one last year and found the race to be challenging, yet uncrowded with a really fun atmosphere.  Since then, I’ve ran 2 of the Average Joe’s other races and found them to be second to none as far as organization, support and bling!  This race even offers free child care!  I mean, who does that?!
So the Showdown Half and 5K is centered around the OU/UT, Red River shootout, which was played later that day (10/12/13) and won by the UT Longhorns….Hook Em’ Horns!  When you enter, you can pick a side (we pick UT, Louis LOVES the longhorns) and your medal, bib and shirt display the school colors.  I love this idea!  If you are neutral, or don’t really cheer for either side, there is an option available for that too!
Packet pick-up was the easiest ever.  I think it took two minutes and I even exchanged my t-shirt!  I also picked up my sons packet for the 100 yard dash.  He participated in the 50 yard dash last year as well. When he and some other kiddos finished they all just kept running, prompting the increased distance. There were many days/times available to pick up the packets, including race morning.  I went on Friday at lunch.
Race Day
Up at 5:45am….ouch. 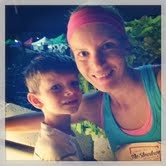 We arrived at the race site in plenty of time to park and walk about 2 blocks to the start.  At 7am sharp the kids were off! 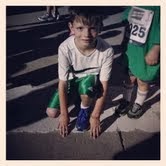 Louis finished middle of the pack last year, but smoked it this year.  Here is his blur as he crossed the finish line.  He finished about 6th! In a mad frenzy, we then raced to the car and to the off-site child care.  I was back in plenty of time with 10 minutes to spare.
And then at 7:30 sharp the half marathoners were off.
Last year’s course was really hilly and while this was not without hills, it was much improved as far as that goes.  The first half was mostly at a slight decline which provided some really great splits.
The only problem was the weather.
The humidity was around horrid, miserable and abysmal!  Typically the weather in Texas this time of year is beautiful, as it had been just days prior.
Humidity and I don’t see eye to eye, so I knew it wouldn’t be the sub 2 performance I had wanted…
I kept up with some great paces the first couple of miles and then met up with my friend Kim, who was running intervals as she was coming back from an injury.  I can’t thank her enough for sticking with me.  My attitude was not in the right place and she kept me positive.  Even with a lot of walking we were hitting 10/10:30 min/miles and about a 9 minute pace when we ran, which makes me feel good going into my marathon next week, where the weather should be much, much cooler and less humid (fingers crossed). 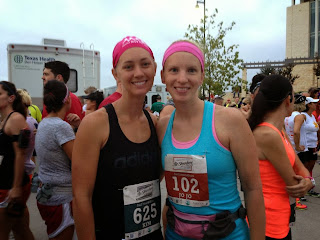 I couldn’t keep up with my breath around mile 10 and told Kim to go ahead.  She did great and finished about 5 minutes before me.
I finished with 2:21:20.  Not my worst, but definitely not my best.  Definitely off goal, but acceptable in spite of the weather.  The last time I ran in that kind of swamp like humidity was in Florida at the Disney princess and that was a 2:45ish effort, so an improvement there.  I also didn’t want to push it too much with a full coming up 8 days later.

The course was scenic and peaceful as always, with farm critters along the way. 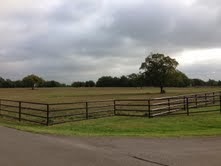 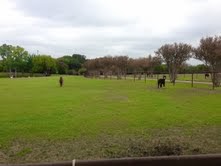 The specating llama's
The Finish
The finish line kept up with the rest of the race….fabulous!
There was plenty of food…bananas, chocolate milk (I even went back for seconds), bagels and KIND bars.  There were even snow cones for all of the participants, which you KNOW we capitalized on!  They felt great on a hot/humid day.
There were some great vendors including Glitz Bands, a chiropractor who fixed my hip flexor with ONE adjustment this spring, massages and a few others.
After the race there are showers available for those who want to go hang out at the nearby pubs and sports bars….again, do you know any other races that provide this?!
I received an additional medal for completing my second race in the Average Joe race series.  The other races include the Fairview Half and the New Year’s Double.  I plan on doing on NYE later this year.

This was a race I highly recommend if you live in the DFW area or come down for the game!  The prices are low and the rewards are plenty.  The race director Libby puts on an awesome production EVERY time!
Posted by JoJoCouture at 12:11 PM 1 comment:

I have a lot of back tracking to do!  I’ve done 2 big races recently and haven’t even had a chance to tell you all about them.

But today, I felt compelled to tell about one of the most special races I have ever run, especially since it is the *day* of the NYC marathon (I mean it is kind of like a holiday for runners!).

Watching it on TV was super cool!  I recognized a lot of the landmarks and neighborhoods I ran by in 2010 and 2011.  Yet it is nothing like being there.  The race atmosphere is electric.  Every race start has amazing energy, but this is something unreal.  So many people, countries, languages and stories.  The hovering helicopters make you feel like a celebrity. 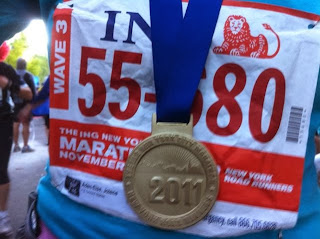 One you get to the start, a young Frank Sinatra sound alike is crooning “New York, New York”.  Everyone knows the words….even the people who don't speak English.  That bridge is upon you….one mile up, one mile down.  It’s one of the most amazing places to be.  The port authority is streaming red, white and blue water from their boats.  It is a day to be running proud. 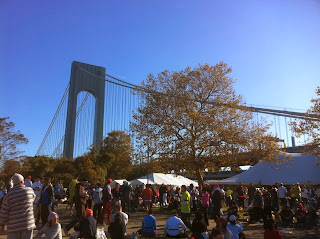 From Staten Island, piles of miles through the business and brownstone, tree lined streets of Brooklyn, to Queens, the Bronx and then finally into the final stretch of Manhattan.  Coming off the Queensborough bridge is like winning the super bowl….thousands of people cheering for YOU as you exit off the quiet bridge, where the only sound is your breath and footsteps.  Into Central Park where digging deep does not even describe what you have to do to get to the finish. 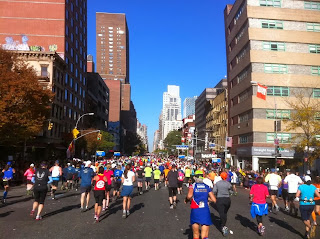 A run down 1st Ave 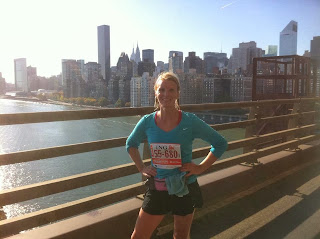 The peace of the Queensborough Bridge (look at that view!) 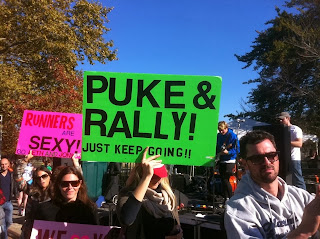 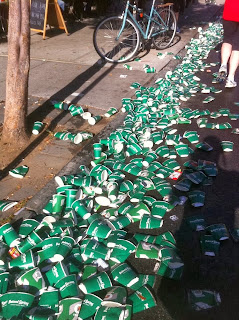 I have never seen so many cups! 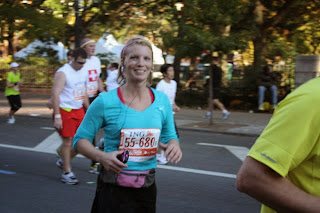 If you can’t tell, I think this marathon is nothing short of amazing.

I've done many other marathons and this one will always be the one that holds my heart, specifically the last one in 2011.

2011 was a *dream*.  I have so many awesome memories of that race through the five boroughs.

My training was so much better.

I had found a great training partner who was also running! 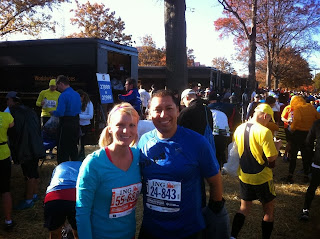 One of the most toxic people I had known was out of my life (surprisingly NOT my ex-husband).

I was not sorely underweight (what girl says that?).

I knocked 20 minutes off my PR and course time the year before.

But most of all….

I was there with people whom I loved and cared for, my friends and family, my boyfriend Ryan.  My people. 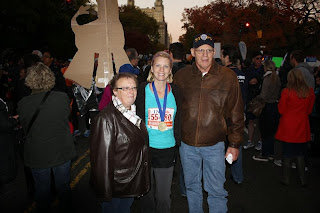 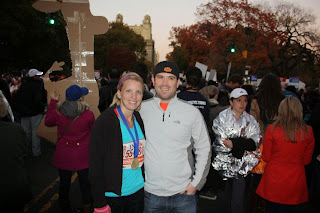 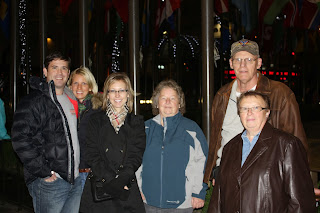 My parents, who’d never been to NYC were finally able to see me finish a race, one of the biggest of my life!

Did I say how amazing this race was?

What has been your amazing race?
Posted by JoJoCouture at 11:50 AM No comments: