A Tale of Two Trails - Part One

This post has been a L O N G time coming...this race dates back to early April, right before Tyrion got sick and that took over our world....BUT,

Earlier this spring, over the span of 5 weeks, I was able to complete my first two ultra marathons. This was something that was a long time coming.  The past two I had signed up for either just didn't work out or were so rainy and muddy that I didn't feel comfortable doing it.

Well these two couldn't have been more perfect.

The first, Possum Kingdom 52k (34 miles for the non-metrics) happened in early April.

The weather was perfect and the race difficult.  Not having ever been to this area of Texas, I had NO idea what I was in for.  My dear sister friend DK, who also ran the race, road tripped from Dallas with me.

Her generous sister had offered up her family's lake home the night before so we could sleep in a real bed, instead of camp (I don't camp, I glamp).  Even though most of the drive was in darkness, she kept assuring me it was "really pretty".

Our 5am alarm came sooner than I wanted.  We arrived at the race site just a few minutes before the race started.  Because it was a fairly small race, packet pick-up took about 10 seconds.  I scarfed down my cinnamon roll and was ready (or not) to hit the trail. 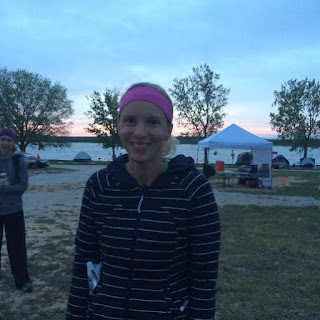 The trail was a mix of sand (2-3 inches deep) and rock.  It was difficult.  Maybe even the hardest thing I have ever done.

The 56k course consisted of two loops of 17 miles, where I got lost twice, likely adding who knows how much more to my mile total.  To say it was "hilly" was an understatement.  It was like borderline mountain climbing (at least a Texas version of it).

My GPS ap had me at a NET elevation gain of over 4,000 feet.  Even the hills of San Francisco were "only" a net gain of around 2,300 feet.  I ran at an easy pace, enjoyed the scenery and the serenity of the park.  It was amazing. 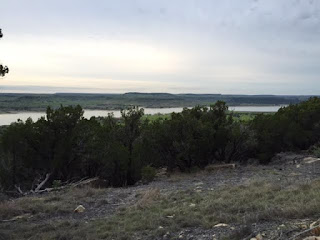 Every once in awhile, I'd come upon another runner going my way, run and talk with them for a little bit and move on.  My glutes and hamstrings were screaming around mile 20-22 and I knew it was about to get real.

Then I fell.  On a large rock/bolder (at least it wasn't into a giant cactus!).

I had just thought to myself - wow, I can't believe I haven't fallen today and down I went.  I smacked my face on the rock, came up with a mouth full of gravel and wholeheartedly believed I had broken a tooth.  Thank goodness this was not the case. 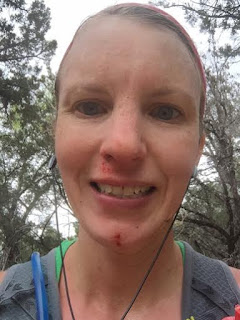 A little blood never hurt anyone...so instead of crying and/or wallowing in my misfortune, I carried on.  I was too far from the last aid station to back track and still about 4 miles (or about an hour) from the next one.  To my surprise, a state patrolman was at a road crossing and had a first aid kit!

The whole race is kind of a blur now that I think about it, but it was really fun!

Trail runners are so incredibly kind, as are the volunteers.  Every person who came towards me on their way back would ask how I was doing and offer a word or two of encouragement.  You don't get that at road races.  I especially noticed this after I had fallen.  One of the ladies at the last aid station must have thought I looked bad enough that I couldn't finish (she was only being kind).  At mile 32ish.  Helllllls no.   I hadn't gotten that far to quit then!

The last few miles I pushed harder than I thought I would.  I even ran most of them, even though I was exhausted from being out there for 8 hours already.  One of the things I loved most about the day and the run was being alone with my thoughts.  Don't get me wrong, I love running with my friends, but it is so serene, quiet and peaceful, you can really just think.

The end NEVER seemed to come and I was starting to get a little flustered.  I knew I was close, but I just couldn't find the trail head back to home base (which I also missed my first time around).    I called my friend DK and we tried to figure it out.  My phone was about to die. Lucky for me, someone else had gotten turned around too and this angel sent from heaven went probably a half mile out of his way to help me get back to the start/finish (trail runners are a whole 'nother breed!). I'd missed this turn entirely on the first loop, so I knew exactly why I got messed up.  Apparently, I don't follow arrows so well when delirious. 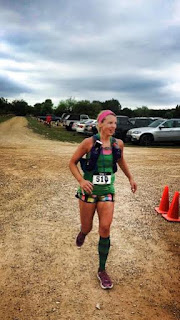 My friends DK and Aimee were waiting for me at the finish and I couldn't have been happier to see their faces!  They had already finished their races and I was so happy for them for finishing strong! We all celebrated together. 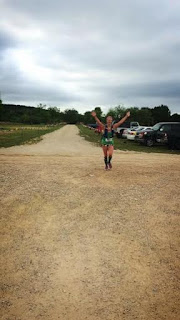 I collected the most awesome medal I have (it's made of clay!) and my honey bear and went back to the campground where DK and her family was staying and hung out for a bit.

It was nice to decompress and laugh before having to drive back to Dallas (about 2.5 hours).

The shower after the race had to have been the best shower I have ever taken!

It had been an amazing day.

This race was the first in a series of five that the Endurance Buzz Adventure tribe has put together.  I was hurting, but honestly, I couldn't wait to get out there again!

Up next, Part Two - Whispering Pines....
Posted by JoJoCouture at 9:09 PM No comments: