A revisit with a nemesis of mine.

The Dallas Marathon, previously known as the White Rock Marathon.

The last time I ran this race (in 2012), I had an epic meltdown of a day.  I was on pace to finish around 4:20 (which would have been a huge PR for me) and ended up finishing over an hour slower than that due to humid conditions and a rockin' case of dehydration and the pukes.

So I signed up to run this again last year, got iced out, and because they offered those of us who were cancelled on last year a too good to be true entry fee and our medal from last year, I figured why not.

Back tracking to a couple months ago...

My MRTT frunners Faith and Nicole told me if I agreed to run with them at a little bit of a slower pace, they'd both do their first full marathon.  Of course I said YES!  I love seeing friends complete huge 'mile'stones and wanted to live vicariously through them, reliving my early marathon days (which really weren't *that* long ago).

Unfortunately Nicole got injured, but lucky for me, Faith was still game!

Packet pickup the day before the race was a breeze!  Considering new rules were put in place where each runner had to pick up their packet/bib in person (security reasons), the expo was a lot less crowded that I thought it would be.  Although several big names ran this race...Meb, Deana (both of whom handed out medals at the end!), the Halls, none of them were at the expo.

Early that morning I met a group of MRTT frunners to ride together on the train to the start. 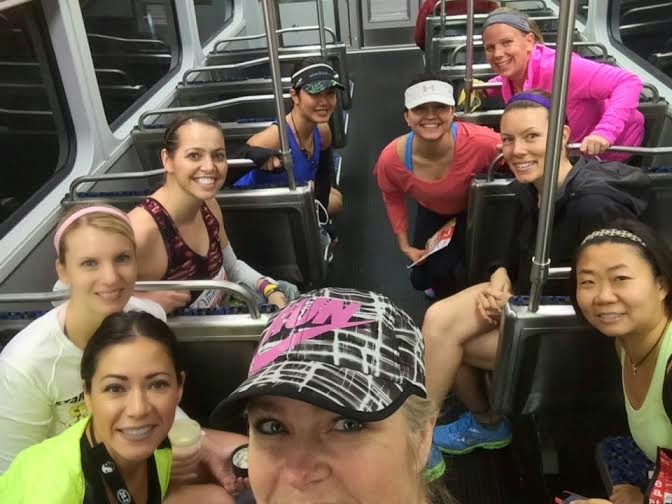 We had planned on all meeting up for a picture, but crowds prevented that from happening.  So we took lots of group pictures!  Just smaller. 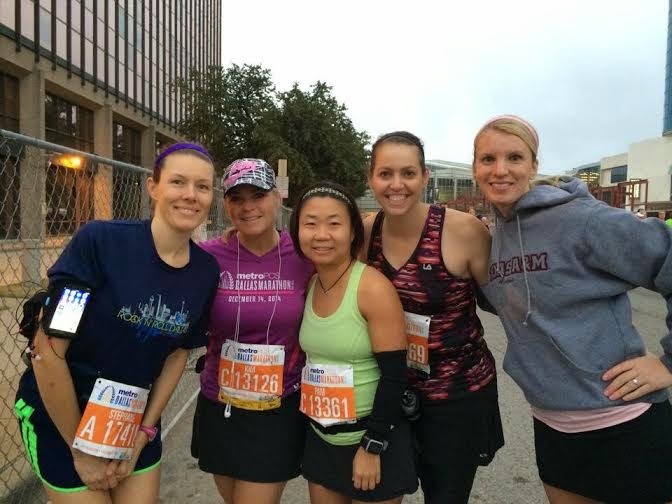 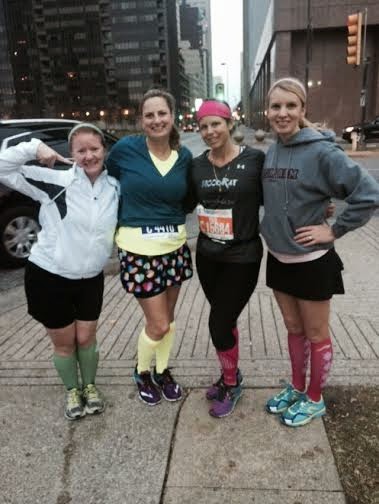 I met up with Faith and a couple other friends and we loaded into an extremely crowded corral.  Despite have 20k runners, the Dallas Marathon only has 3 corrals. We were both surprised when we saw a familiar face in the sea of people. 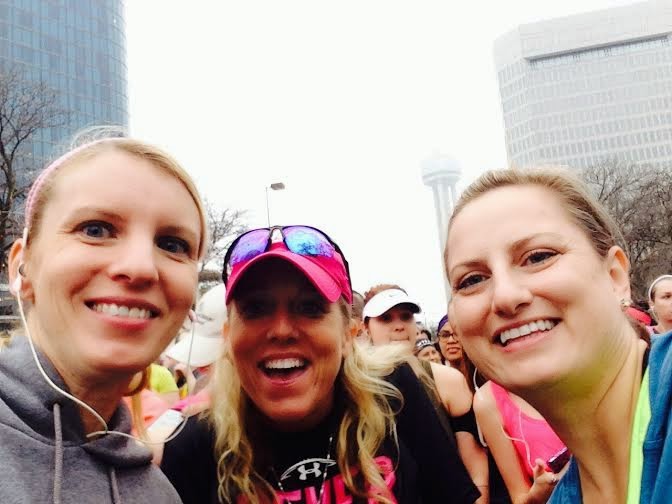 We went over our game plan and before we knew it we were off.

Sticking with a new tradition, I made Faith take a picture at mile marker 1, marking her first marathon. 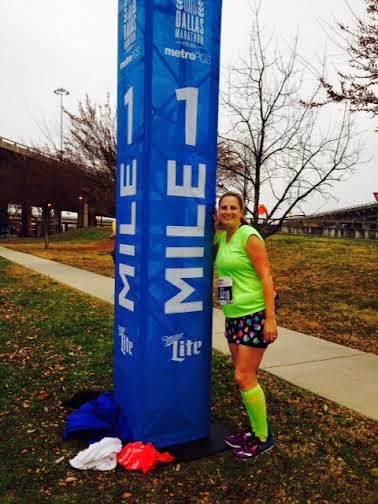 I told her at each marathon after this (she was kidding me that I was already planning more when we hadn't even finished the first one) she'd have to take a photo by the corresponding mile marker.  We had our despised first mile out of the way! 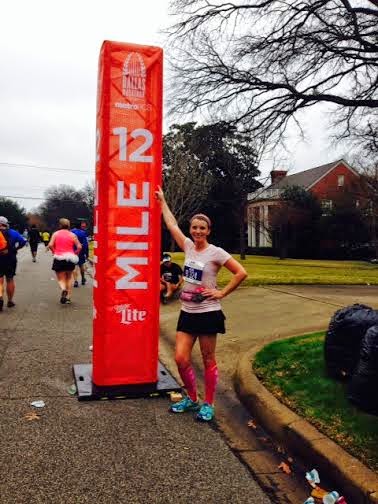 The marathon took on a whole new route this year which took us through downtown first, then over to Highland Park, Swiss Avenue, the M streets and the dreaded Dolly Partons (use your imagination here).  In past years, the Dolly's came late in the race, around mile 20, when legs are tired and spunk is dwindling.  I think we were both happy to get them out of the way.  They didn't even seem that bad!

On our way there frunners Nicole (who got injured), Kelly & Monica came out on a dreary, drizzly morning to cheer us on. 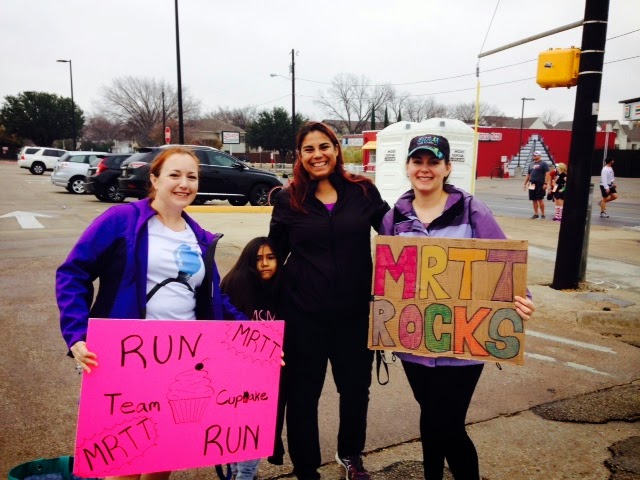 We saw them at mile 9 & it gave us a much needed push.  They gave us the power we needed to forge on to the half way mark. 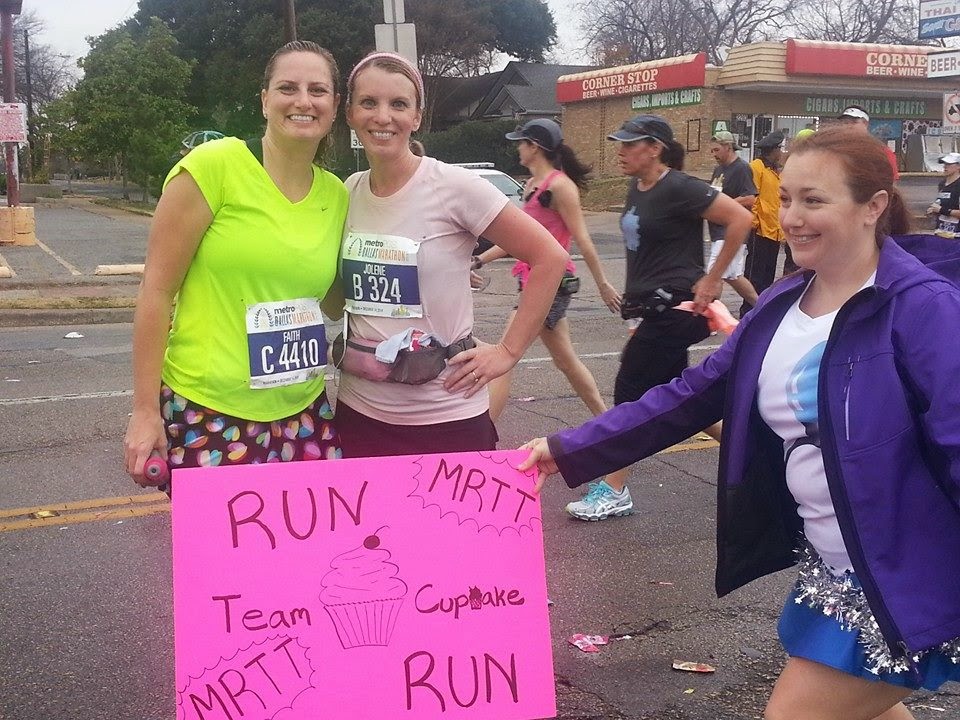 As we neared White Rock Lake, the mist turned into drizzle, which kind of felt good at the time...but, we had no idea what was about to come. 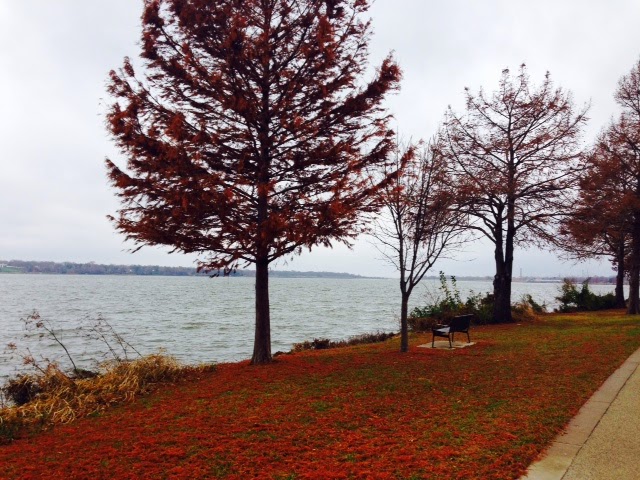 Up until about the halfway point Faith and I were rocking the 2:1 intervals; run 2 minutes, walk 1 minute.  Faith's walk was more of a jog for me (I thought I walked fast!) and we maintained around a 12:30min/mile past the halfway point.  Out towards the lake we saw Faith's husband and kids.  Her kiddos were SO excited to see her!!  Definitely a high point in the day for her I'm sure!  Since the route doubled back at the lake, we saw them twice.

Then....the rain came.  We hit mile 16 and it pretty much started pouring.  After the lake, the route shot us out on the Sante Fe trail which was amazing and serene, but we were just soaked.  The rain hurt my face, our shoes where making sucking noises on the pavement and I'm pretty sure we both wanted to cry and/or quit at some point, but just didn't say it.  We kept telling each other "at least it isn't cold" to somehow make the pouring rain seem better?  Someone had the brilliant idea to hang speakers ALL along this trail and honestly, it kind of kept me pumped up.  Neither of us listened to music the entire day, so it was a nice distraction.

We settled into 1:1 intervals at this point, which was working.  Several times I looked at Faith (who was probably bonkers from my jibber jabber) and she kept saying "I'm trying".  Her determination was shining through.  I had no doubt she would finish this well within the time she thought she would.

Finally around mile 20 it stopped raining.  Amen!!  We forged back down Swiss Avenue (a beautfil part of the course, btw)getting closer and closer to downtown and our finish line.  Nicole stayed the duration and met us around mile 23 with her smile and some super powered cupcakes (she is my cupcake pusher & and an *amazing* friend).  She gave us some encouraging words and we kept trucking. 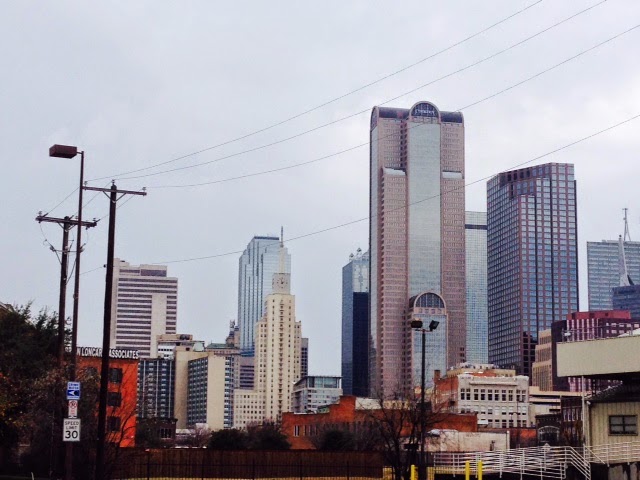 we needed to get here

I know those last few miles were hard for Faith.  They are hard no matter if you've run one marathon or twelve or twenty.  Heavy legs, dwindling energy supply and mental exhausting are not a great combo, yet your eye has to stay on the prize.  Faith's determination kept me from dwelling on my own discomfort.  I kept promising her she wouldn't die.  She kept telling me she was still trying.  We picked up the pace and ran one of our faster miles during the second half onto the finish.

Faith's husband and kids were at the finish and they were SO proud!  I was so proud!  I felt like I was running my first marathon again. 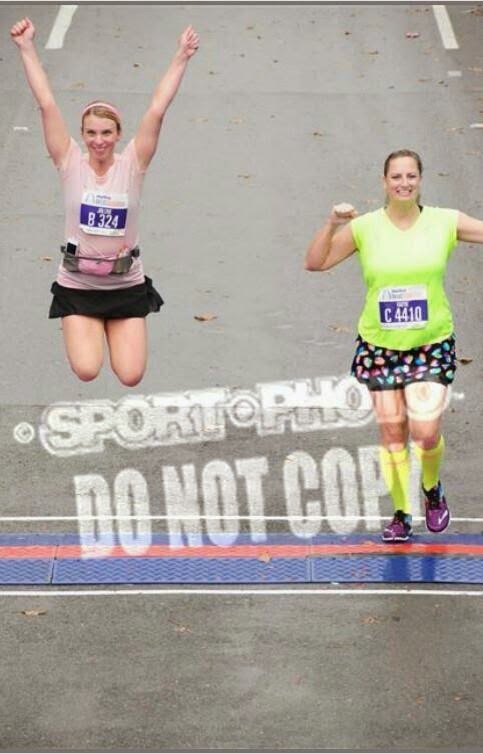 despite the crazy look on my face, a photog *finally* captured an epic finish!

We crossed the finish in 5:48:02 and collected our medals. 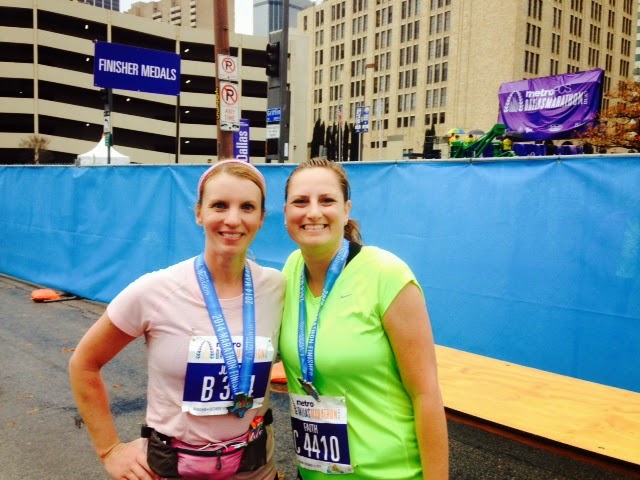 Since I was iced out last year and had completed the Dallas Rock and Roll half marathon earlier in the year, I came home with a haul!  All in a days work! 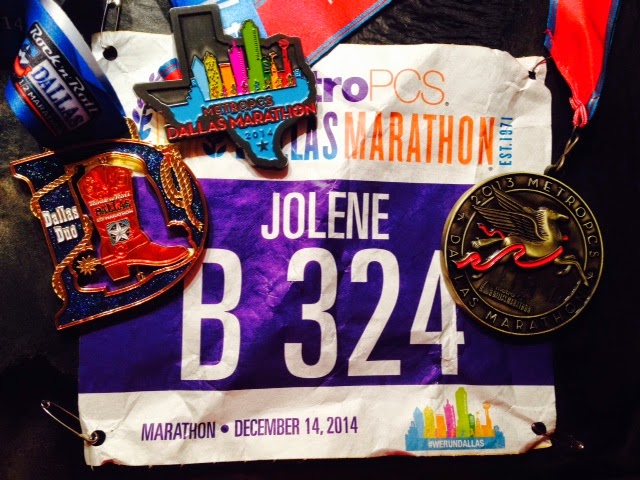 Prior to this race, I told myself and a few others I'd probably never do this race again, yet with the changes in the course and the improvement in support, I may think twice about saying never again next year. 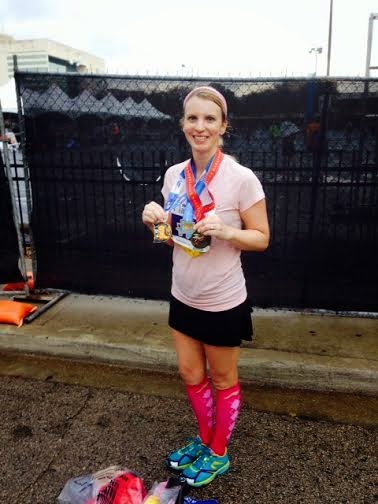 Since I was able to run this race at an easier pace, my recovery has been minimal.  Great for someone who is running double marathons, double 5ks in 2 weeks (yikes!).

Paying it forward proved to be an incredible experience for me.  I was suffering from the running sads for several weeks after the NYC marathon due to a huge build up and a less than desired finish there.  I am now ready to hit my next goal and I'm pretty sure Faith is ready to sign up for another marathon! 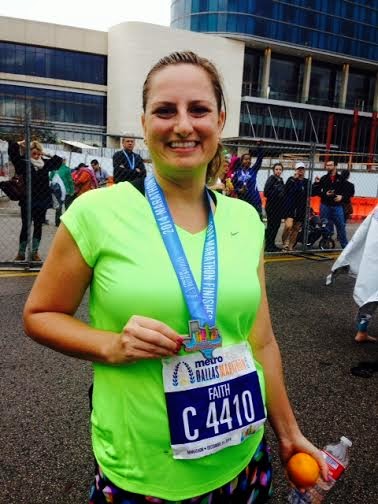 the smile says it all!
Posted by JoJoCouture at 9:20 PM